Crossing The Line At Area 51

Life beyond Earth has always been something I’ve questioned. It’s a fascinating question that led me to film my journey (video below) to the top secret research facility in the Nevada desert. Area 51 is so secretive that use of deadly force is authorized if outsiders try to infiltrate the premises. It is arguably the most covert place on earth where answers to the existence of aliens and UFO’s could undoubtedly be held. 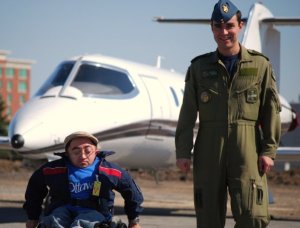 The team that joined me on my mission to discover Area 51 were two fighter jet pilots in the Canadian Air force Craig and my younger brother Javier. They also share my curiosity and enthusiasm for life beyond our planet. Javier’s girlfriend, Nicky joined us as well. Although the two pilots did not like to speak about their profession on camera, they were both eager to find answers at Area 51. It’s also something my brother and I have talked about since we were kids. 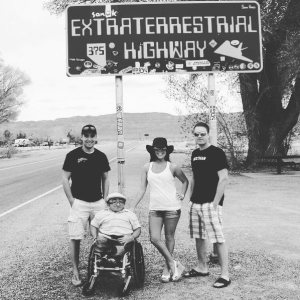 The plan was to see how far we could enter the property. There is a no trespassing sign on the road that very few people have ever crossed. The top secret facility is surrounded with high-tech motion detectors, heat sensors, vibration sensors and a restricted airspace.

Many believe that the famous Roswell crash was an alien spacecraft. A widespread belief is that the government shipped the wreckage and alleged bodies to Area 51 for examination and research.

OBAMA – “I can’t reveal anything”

The Roswell crash has gone down in conspiracy theory circles as a U.S. government cover up. Believers say that aliens in a flying saucer crashed in Roswell, New Mexico with badly injured aliens on board in June or July 1947. At the time spokesmen from Roswell army air base said that a ‘flying disc’ was found – but just hours later retracted the statement insisting instead that it was a weather balloon.

The story took an interesting twist three years ago. Lieutenant Walter Haut was the public relations officer at the base in 1947. He was the man who issued the original and subsequent press releases after the crash on the orders of the base commander, Colonel William Blanchard. Haut died in 2006, but left a sworn affidavit to be opened only after his death.

The text asserts that the weather balloon claim was a cover story, and that the real object had been recovered by the military and stored in a hangar. He described seeing not just the craft, but alien bodies.

Finally the day arrived! The four of us met at a Las Vegas hotel where we planned the 123 mile drive into the desert. We decided that my brother would drive the extraterrestrial highway to the nearest town next to the top secret facility. Hours into the long drive and without a tree in sight we arrived in the remote town of Rachel, Nevada when we noticed a nearby restaurant and decided to check it out. It was was a small quaint greasy spoons type place where we enjoyed an Alien burger while locals told stories of flying saucers and odd lights in the skies.

After lunch in the quirky diner, it was time to proceed with our mission and make our way to the Area 51 compound. As we drove down the winding dirt road, a huge cloud of dust engulfed our car making it nearly impossible to drive undetected. Finally we arrive at the infamous no trespassing signs. In the distance we could spot motion sensors, cameras, and the famous “Cammo Dudes” on a hilltop. The Cammo Dudes usually drive around in four-wheel-drive vehicles, keeping an eye on anyone that goes near the borders of Area 51.

Oddly, our vehicle got a flat tire a mere 20 meters from the restricted line. We all exited the car where my brother and Craig inspected the tire. In the distance I spotted the cammo dudes observing us with binoculars. I argued with both Craig and Javier to tough it out and stick to the plan and cross the line with me. They insisted they needed to fix the flat tire so I decided to do it on my own. Nicky filmed as I crossed the restricted line.

I wheeled approximately 20 meters past the sign when I noticed the cammo dudes started to drive down the hill towards me. I admit, I was frightened. I quickly retreated pass the sign and back where my brother and Craig finished fixing the tire. It was getting dark and we realized nothing more could be done so we made the drive back to Las Vegas.

It was probably best Javier and Craig didn’t join me in crossing the line. If the authorities had intervened who knows what kind of possible military discipline they would have recieved back home in Canada. I can’t imagine what would happen if two Canadian Air Force pilots were caught trying to breach into a United States top secret military installation.

In the end, I realized how seriously guarded this facility is and that the secrets within might never be revealed in my lifetime.  No person on earth has ever successfully breached Area 51 and been able to talk about it.

What would it take to get a glimpse or an answer from the most secretive place on earth. If one were to breach Area 51 and see something, the consequences are unknown.

When we embarked on our journey to Area 51, I believe our minds were clouded by childhood ideas. We didn’t think about the consequences of what could have turned into a very bad situation; at least I didn’t. However, with everything in life, there’s a line. On one side of the line there are better results, better relationships, opportunity and maybe answers you are looking for. On the other side, there’s the unknown.

With each line in life, we have choices. Either we cross that line, or we don’t. How far past the line are most people willing to go in their lives? Although I didn’t unlock the mysteries of Area 51, I can’t say I won’t try again.